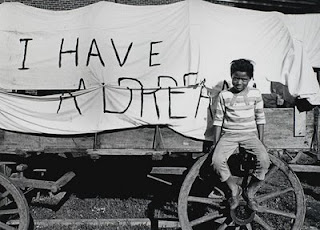 There's a series of films one can order called "A Force More Powerful: A Century of Nonviolent Conflict." The series includes material from nonviolent struggles in India, the U.S., Poland, Chile, South Africa, and Denmark. Each segment is inspiring. Together, they give one hope that nonviolence can be both practical and possible. Coupled with the film "Bringing Down a Dictator" (available from the same source), about the nonviolent deposing of Slobodan Milosevic, the "Butcher of the Balkans," one can envision a historic shift last century in the dynamics of social change.

There are two elements revealed in these historic materials that are sometimes forgotten in contemporary nonviolence activities. The first is training. The second is faith.

The struggle depicted in the film from the U.S. is the Civil Rights struggle. It focuses on efforts to integrate lunch counters in Nashville, TN. One soon becomes aware that those who participated in this struggle went through some rigorous training. People thought about what they would do in various circumstances and practiced how they would respond through role plays. Leadership engaged in strategic thinking and long range planning. Good intentions and passion for a cause were important but not sufficient. What might a well placed blow do to good intentions?

I remember clearly the well placed blow I received from a police nightstick in Washington DC. It was during a mobilization against the war in Vietnam. I was walking on the lawn near the Washington Monument. Someone threw a bottle in the street in front of a police car. An enraged officer jumped out of the car. With one swing from his club, he hit a young woman aside her head and dropped her to the ground. I was shocked into disbelief. She was an innocent bystander. So I steeled myself, looking straight at the officer with an incredulous gaze. He felt my look and as he started toward me, I vowed to stand my ground. The nightstick caught my upper arm as I raised it to protect my head. The pain was huge, my vow withered and I ran as fast as I could.

I had good intentions but no training and little preparation.

The other element exhibited in these nonviolent struggles is faith. It doesn't have to be religious faith (although the people integrating those lunch counters sang hymns, in church, before going about their task). Religious faith can be an important foundational element in a successful nonviolent struggle. But faith, in the larger sense, means you have ultimate confidence in the rightness of your cause.

Training and faith ... two important elements for those pursuing nonviolence.