The crowd was moving slowly, fitfully, down the dirt road toward the entrance to the landholders palatial home. They moved as one, not allowing any member to stray, as if certain danger would envelop them. These were landless peasants in India. They had been encamped on and around the property of this wealthy landlord for months. The peasants would plant an acre or two in a far field, left untilled, only to have the landlord plow the planting under as it neared ripening and time for harvest. The landlord would hire goons to descend on the landless camp in the middle of the night, trying to frighten them away. The landless burned the landlord in effigy. Day by day the violence was escalating.

Now, the landlord waited inside the fortified walls of his estate. The walls were made of thick concrete topped with barb wire and broken shards of glass to keep the criminals and landless out. But today, for the first time, the poorest of the poor would walk through the gate, onto the veranda of the estate. Here the landlord would announce a land sale to the still fearful crowd.

This event was made possible by the diligent and persuasive work of two followers of Vinoba Bhave, a disciple of Mahatma Gandhi. Vinoba was the founder of the bhoodan (land gift) movement in India. He walked all around the country asking the landed to give a portion of their land for the landless. He invited people to consider him a member of the family. So if they had five children, they were to consider him a sixth, and then give him a sixth of their land for the landless. In this way he collected millions of acres all across India. 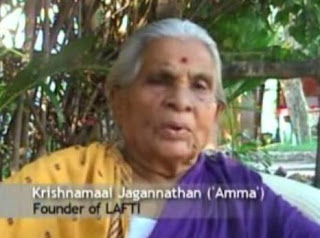 Krishnamaal and Jagannathan were walking in his footsteps. They had founded the organization known as LAFTI (Land for the Tiller's Freedom). In this particular case, they had finally convinced the notorious landlord it was in his interest to make this sale, at a reasonable price. The most convincing argument they used revolved around the condition of the landlord's soul.

I was watching this transaction as I spent a couple of days on a padayatra (walk) with Krishnammal and Jagannathan. Looking through the palatial home of the landlord I was drawn to pictures of his children, with their Mercedes and fine homes in European capitals. There was no such word as "want" in the family home. Yet, the patriarch was worried about the state of his soul. It made me aware of how the rich might be invited to share with the poor on other grounds than equality and Justice. There is a religious dimension that some might consider.

Proponents of nonviolence, especially those of us raised in a liberal, secular culture that abhors old-fashioned ideas of heaven and hell, might carefully consider contemporary conceptions of soul. Then we might develop the courage to add "saving the soul" to the conversation.