Our dog Toby had some very strange habits. Every time we went to the lake, he would dig and burrow in the shallow water for stones. When he successfully dislodged one, he would get it in his mouth and drop it on the bank, just out of the water. We thought about hiring him out for clearing beaches, but he was awfully slow removing just one stone at a time.

Toby could also sit on his haunches like a gopher. And he could back those haunches up to a tree with wonderful accuracy. He would deposit his droppings right at the base of the trunk, as if it were his duty to fertilize the tree. He rarely left his business anyplace else. Scooting the rump up a tree trunk was always the prelude to another deposit. Even though this seemed unusual and highly skilled behavior, I was astonished on one walk. He backed up to the cap on a water pipe, sticking up six inches off the ground, and delicately left his business on the cap. The cap couldn't have been more than three or four inches in diameter!

Of course, there were the usual things that make a dog dear to us. He expressed his love through his tail, his tongue, his eyes. He could make you change your mind by looking sad or glad. Those big brown eyes revealed his soul.

I don't know. I think dogs have souls; and cats, and polar bears, and ground hogs, and pigs, and tigers. I'm thinking about animals today because I just read about a girl who put a kitten in the oven, turned up the heat and left it to die. She said she "hated cats." I'm also thinking about that polar bear picture I saw, where the bear seems lost on a small chunk of ice, floating into oblivion on a warming planet. And I'm thinking about that ground hog I ran over in the Black Hills. I thought it was road kill. It surprised me when it was too late to avoid it. And I'm thinking about the pigs I saw stuck and bled and cut up and packaged, in the Meat Management Lab at South Dakota State University. I remember how sterile the whole process seemed, as one student kept the hose going the whole time, flushing anything organic, like blood, down the oversized drain in the floor. 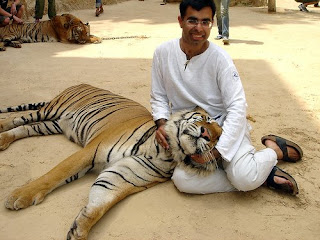 And I'm thinking about that old Buddhist legend I read, where the Prince goes walking in the forest one day, in the midst of a terrible drought. He comes upon a tigress with two small cubs. It's obvious they are all hungry to the point where the tigress will be tempted to eat her own kind. The Prince scratches his arm till the blood flows and lies down to wait. We are told that there is an eternal light in the forest at the spot where this act of compassion took place.

If Toby was an unusual dog, the Prince was certainly an unusual human. The time is upon us where we need to understand that our relationship to each other and to the animal kingdom must be rooted in nonviolence. It's our only path to survival.