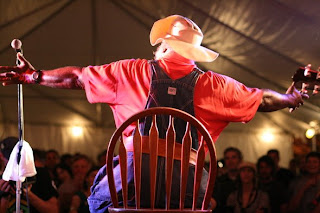 You may be familiar with Playing for Change, a multimedia movement created to inspire, connect, and bring peace to the world through music. As part of the movement, musicians and singers from around the globe are brought together to perform, either through the magic of technology or (more recently) live on stage.

Within the past week the Playing for Change producers released their latest work, a performance of "Change Is Gonna Come," a song written and first made famous by the legendary Sam Cooke, one of the founders of soul music. This performance was recorded and filmed live last year before a street audience of thousands in New Orleans.

Featured in this video are Grandpa Elliott, a blind street musician and singer from New Orleans, Louisiana; singer Clarence Bekker from Amsterdam, Netherlands; guitarist Louis Mhlanga from Harare, Zimbabwe; and bass player Reggie McBride from Detroit, Michigan. They had never met until their rehearsal for this event.

Witness the soul and conviction of these talented men whose powerful performance demonstrates that we can truly come together as a human race, one song at a time. As Playing for Change co-founder Mark Johnson reminds us, "We are the Change we want to see in the world."

Note: This six-minute video may take a long time to load. Please be patient. The wait is worth it. While loading, you may want to busy yourself doing something else, then listen by clicking "Play" whenever you're ready.

Posted by Phyllis Cole-Dai at 9:15 AM