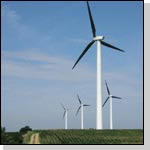 Although the faltering economy has received plenty of attention in the press and in the halls of Congress, few decision makers are asking the fundamental questions that need to be addressed. Why have we allowed the growth of institutions "too big to fail?" Must the economy continue to produce unnecessary waste products or is a sustainable model possible? How can we reorient the economy so it honors the earth? Can local economies better serve human needs?

An example of what I mean is near at hand. Just a few miles from our home is the second largest concentration of wind mills in the country, along Buffalo Ridge. Wind farms continue to develop across the state. On the one hand, I'm grateful we are developing this renewable resource and moving away from fossil fuels. On the other hand, why must we have huge developments needing huge amounts of capitol and power transmitted by huge energy corporations. What if we were to develop smaller wind generated power, accessible to each and every household. Extra power could go into a grid to be used by community wide institutions, like schools.

There are a few individuals in South Dakota who are initiating some debate about residential windmills. They are asking permission to have household windmills in town. One of the biggest obstacles seems to be what to do with excess power. The large power companies don't want to mess with small scale operations and local governments seem clueless about how local economies of scale might create real community.

Everyday nonviolence makes use of many different approaches to raise issues about a "just" economy. One way is to initiate new conversations about how a community might develop, with household generated power sources. Certainly one of the most entertaining approaches these days is a guerilla theatre operation called Reverend Billy and the Stop Shopping Gospel Choir. They have produced a hilarious DVD called "What Would Jesus Buy?" Imagine touring the country just before Christmas, stopping in big box stores and the Mall of America, and preaching/singing to the shoppers about how they should stop shopping. "The shopocalypse is upon us ... who will be saved." As you might expect, the result of their theatre is a security escort out of the building, sometimes arrest.

Recently, Rev. Billy has changed his approach. Now he's running for mayor of New York City. He's running on a Green Party platform of the importance of neighborhood. His supporters are small business owners and others who don't want the big corporations, big banks, and big box stores, coming into their neighborhoods and destroying their experience of community.

We need a lot more of us talking about and experimenting with, sustainability. The earth won't survive much more exploitation. Nor will the human person. Preach, Billy, Preach!
Posted by Carl Kline at 10:23 AM