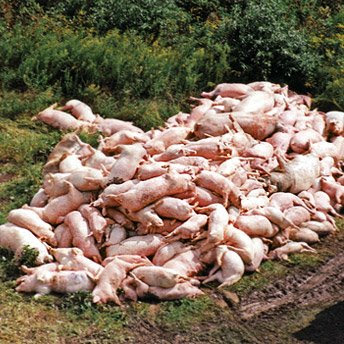 The Mexican press has reported that the swine flu virus originated at a hog operation near Perote, in the state of Vera Cruz. This CAFO (concentrated animal feeding operation) is run by Granjas Carroll, a subsidiary of the U.S. hog producer, Smithfield Farms. (See the article on Smithfield Farms by Jeff Tietz in the December 14, 2006 issue of Rolling Stone.) Granjas Carroll fattens some 950,000 pigs a year. Residents near the Perote operation have been bringing complaints about respiratory problems to the authorities for months, without a response.

Anyone living near a CAFO is aware of the potential health hazards. If it's not the air or water quality, it's the nauseous smell. Living in South Dakota, as I do, I can smell most CAFOs a mile away, even with the car windows closed. But perhaps we haven't adequately addressed the potential health dangers these factory farms pose to the development of new viruses. First the bird flu, now the swine flu.

E.F. Schumacher gave us the book, Small Is Beautiful. The subtitle is, appropriately, Economics As If People Mattered. It's a clear and unmistakable call to think small; to think in terms of family, of neighborhood, of community. If what you are about to do negatively affects your neighbor, or the earth, you don't do it. You apply the principle of ahimsa, no harm. You place people before profit.

The swine flu experience should convince us that we are truly one human family. The values (or lack of them) of one CEO of one corporate giant like Smithfield Farms, can potentially impact the health and well being of any and every person on the planet. This recognition comes at the same time we are experiencing the consequences of banks and insurance companies "too big to fail." One failing financial giant can threaten economic catastrophe for people all over the globe.

Now is a good time for all of us to think small. How do we create those small scale, sustainable efforts that will build the new society in the shell of the old? A good start might be for pork eaters to start buying local, encouraging farmers to raise a few pigs for the neighborhood market, as their forebears did before Smithfield monopolized the industry. How about a CSA (community supported agriculture) for pork producers? And what if we quit buying Smithfield products?

It's a fact, stark as never before. If we want to think about economics as if the great majority of the world's people mattered, then centralization and "big is better" thinking brings de-development. De-centralization and an attitude of "small is beautiful" brings development. As Gandhi recognized, "there's enough for everyone's need, but not for anyone's greed."