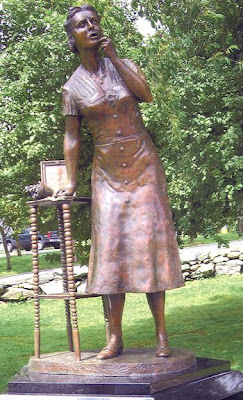 Participants in that first Stand for Peace subsequently decided to hold the vigil every Sunday, regardless of changing weather and shifting political winds. This Mother’s Day marks its second anniversary. Deedee Buettner, who stands regularly, describes it as “a vigil of caring and concern for our young military people; for all people who serve our country; for the future of our nation; for the future of our world.”

The fact that Mother’s Day inspired a peace vigil shouldn’t be surprising. The origins of this American holiday can be traced to the hard work of peacemaking and reconciliation during and after the Civil War. Julia Ward Howe, who wrote the words to “The Battle Hymn of the Republic,” was an early voice calling for a Mother’s Day observance. Dismayed first by the Civil War and then by the outbreak of the Franco-Prussian War in 1870, Howe issued her famous “Mother’s Day Proclamation,” summoning women around the world to rise up against war on behalf of their own children as well as “the great human family.” She urged the creation of a “Mother’s Day for Peace,” but was unsuccessful.

Anna Jarvis, another woman intent on healing the nation after the Civil War, started an annual “Mother’s Friendship Day” to help reconcile Union and Confederate neighbors in her native Appalachia. After Jarvis died in 1905, her daughter campaigned for a national Mother’s Day holiday, wishing to pay tribute to her mother’s life and peacemaking efforts. It was finally established in 1914.

Though now a weekly event, the Brookings Stand for Peace continues to honor the original spirit of Mother’s Day. Many of those who participate, such as Chris and Florence Moller, are moved to do so by faith. “The Lutheran Church has always emphasized the Christ as the Prince of Peace,” they say. Fellow Lutheran Jeff Buettner agrees, observing that as a pastor he feels “driven to always emphasize the many ways Jesus of Nazareth shunned violence and domination in favor of love, understanding and peace for all.” Carl Kline, a United Church of Christ minister, says the vigil “disciplines me to be thoughtful and prayerful at least once a week about how wars are being waged in my name. It also gives me an opportunity to be with other like-minded people who are making peacemaking a priority in their lives.” Michael Feikema participates because his studies of history and theology have convinced him that “grassroots movements are decisive in making positive change in the world.” Change is exactly what mother and grandmother Susan Thompson was hoping for when she started standing for peace two years ago, but given the number of wars being waged in the world, she’s realistic. “With a heavy heart I feel that I’ll be standing for peace indefinitely. When will world leaders learn that war is not the answer?”

The Statue in New Hampshire Honors Gold Star Mothers
(First published as a "Speak Out" in the Brookings, SD Register.)
Posted by Carl Kline at 10:41 AM