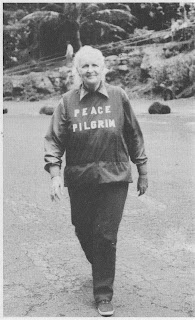 The other day, as I was searching the bookshelves for a resource for a class, I came across a volume about Peace Pilgrim. I hadn't thought too much about her since her death on a highway in Indiana in July of 1981. She was struck by a passing car on her seventh cross country walk.

It's estimated that Peace Pilgrim walked more than 25,000 miles in her three decades of crossing the country. She carried no money or material possessions, only the clothes on her back, a toothbrush in her pocket, and a message about peace in her heart. She took pride in the fact she wouldn't eat unless offered a meal, wouldn't sleep unless offered shelter. She depended on the hospitality of others and as her friendships across the country increased, more and more homes were thrown open to her.

We met Peace Pilgrim because a friend in Massachusetts called to say she would be in our neighborhood in South Dakota. Could we host her? We said yes, not really knowing anything about her, but gradually discovering this network of peace people who helped schedule her food and shelter all across the continent.

Her message was simple: overcome evil with good, falsehood with truth, hatred with love. She talked a lot about inner peace.

One piece of advice she offered has remained in my memory for some thirty years. We were talking about family conflicts, especially between husbands and wives. Peace Pilgrim said her advice for partners in conflict was for both husband and wife to leave the house, by the same door, walking in different directions, around the block. "Just keep walking," she said. "Keep walking until in passing the other, you realize you want to walk in the same direction."

Walking, as Peace Pilgrim demonstrated, can clear the head, open the heart, extend the hand.