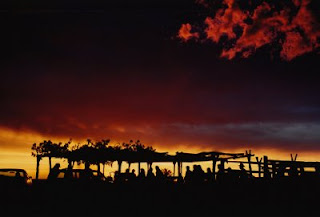 The trip across the prairie had grown gradually warmer as the sun moved higher in the sky. Piercing blue ahead of us. A cloud of golden brown dust behind. We were on our way to the Ring Thunder family powwow. Newly arrived in South Dakota from the urban and suburban sprawl of New Jersey, I had little clue about what to expect. Vague, guilty anxiety rumbled around in my stomach. I felt all too aware of the less than admirable legacy of white presence in Lakota country, all too aware that in crossing the water into West River country, I was no longer on familiar turf - - rather a visitor in another nation, all too aware that the color of my skin alone was enough to evoke terrible memories.

Suddenly we were at our destination. The rattling gray van pulled into a parking slot at the perimeter of an open wooden arbor, roof latticed with tree branches for shade in the warm June sun. My anxiety hit 10+. How would we be received? How would we be perceived? Tourists? White liberal do-gooders? Ancient enemies? Maybe I would just sit in the van.

Sitting in the van was not an option and I scrambled over the seats and miscellaneous back packs to make my way out into the dust and the heat.

My feet had barely touched the ground when I heard a mid-western twang bursting out of the squawky PA system. “OK folks, we have some guests. Come on in - - we’re passing out the potato salad right now - - bring your bowls and forks.” Within seconds my camp bowl was filled with the best potato salad I have ever eaten. I was hungry and you gave me something to eat.

Before long, we were seated on benches under the arbor, bodies resonating with the organic rhythm of the drums, hypnotized by the grass dancing. And then we were drawn out into the center of the powwow circle to dance ourselves, no longer observers but participants in an age old tradition.
I was a stranger and you welcomed me.

The dancing ended and it was time for the Give Away – a sort of redistribution of wealth. A colorful mountain of household items, toys, clothing, and magnificent handmade Star quilts appeared in the center of the powwow circle. Material goods collected over the span of a year for just this moment in the celebration. With great ceremony, names were called and goods distributed. Two children came toward me laden with gifts. Nylon stockings, a purse, a handmade quilt cover - - for me. I was naked and you clothed me.

Vicki Hanjian
Posted by Carl Kline at 11:28 AM