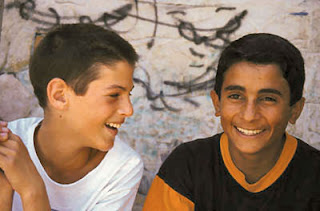 Reflections on an Evening with Combatants for Peace
Rabbi Victor H. Reinstein

Witnessing the suffering of his people at the hands of the Romans, Rabbi Natan, a second century sage, asks, who is a hero of heroes? He answers, one who makes of an enemy a friend. With the peacefulness of Shabbos lingering, we were honored to welcome to Nehar Shalom two people, Bassam Aramin and Yaniv Reshef, each of whom, through the presence of the other, is a hero of heroes.

I have not felt as deeply moved in a long time as I felt on that Saturday night in listening to these two heroes of heroes. Though it came wrapped in pain, I have also not felt as much hope in a long time. Two gentle and beautiful souls, each bearing psychic scars, Bassam and Yaniv were in the states on a speaking tour and to receive the “Courage of Conscience” award from the Peace Abbey of Sherborn, MA on behalf of “Combatants for Peace.” An organization of former Israeli soldiers and Palestinian fighters, “Combatants for Peace” is founded on a renunciation of violence, believing that the bloodshed will not end “unless we act together to terminate the occupation and stop all forms of violence.”

Only in reaching out to each other, Israeli and Palestinian, as for each one of us toward those from whom we are divided, is there hope for sh’laymut/wholeness, the root of shalom. This is the message of the law of the half-shekel (Ex. 30:11-16) at the beginning of the Torah portion Ki Tissa that framed the week of Bassam and Yaniv’s talk. All are to give a half-shekel to the upkeep of the sanctuary. A very small amount, the rich shall not give more and the poor shall not give less. All are equal and need each other to be whole. The 19th century Torah commentator, Malbim, sees in the law of the half-shekel not a teaching about money but of people, each individual is but half... and needs to join with another in order to become a whole entity. As for individuals, yearning for wholeness in the presence of the other, so too for peoples. This is the essential teaching of nonviolence, recognizing the humanity of the other, whom we need in order to be whole. Seeking to overcome and destroy the other, rather than to find common ground and purpose, destroys the possibility of our own wholeness.

Through the witness of their own lives, Bassam and Yaniv offered a profoundly moving, compelling, and personally illustrated teaching on the meaning of nonviolence as a way of life and as a means for change. Traumatized in the way that changes one’s relationship to life, having seen too much killing too close at hand, Yaniv put down his rifle, refusing to again serve as a soldier. Describing the path that led him to understand nonviolence, he shared the power of a moment of confrontation and transformation. His unit had stormed a Palestinian home in Gaza. Facing their guns, a Palestinian man placed a large furry rabbit into a soldier’s arms to be petted, quietly suggesting they put down their weapons. Yaniv spoke of how much safer he felt, once having put down his rifle. Overcoming bitterness and grief, Bassam’s personal example is overwhelming. Having spent seven years in Israeli jails, Bassam came to know the other, and bitterness shifted to a desire to reach out and change his jailers. Bassam spoke quietly of the greatest tragedy, the death of Abir in 2007, his ten-year-old daughter, shot in the head on the way home from school by an Israeli soldier. I cannot read his words without crying, “I’m not going to lose my common sense, my direction, only because I’ve lost my heart, my child. I will do all I can to protect her friends, both Palestinian and Israeli. They are all our children.” Combatants for Peace now builds playgrounds for children, each one called “Abir’s Garden.”

But for the hardest of hearts, it would seem impossible to hear Bassam and Yaniv and not be moved. Whatever our politics or prior assumptions, our particular identities of faith and belonging, our bonds of history and blood, in their presence we are challenged to reflect on the nature of our relationship with others. Whether for individuals or nations, it is only possible to rise to such challenge in the safety of our common humanity recognized, and knowing that the presence of each one is affirmed.

Nonviolence is not an abstract concept. It is not simply about the absence of physical violence. It is about the way that we live our own lives and make real the ideals we profess. It is a way of response to all expressions of violence, a joining of means and ends in challenging all of the ways that people hurt people. Nonviolence is about the way that we listen to and speak of the other. It is about our willingness to consider possibilities and perspectives without setting prior conditions. It is global and it is personal. In the way that we live in relation to others, the challenge of nonviolence is for all of us, not only for those like Bassam and Yaniv, former combatants whose lives have been defined by violence. Demonizing the other, rather than seeking to transform, is a frequent failing of progressives. We do well in offering a vision of the just and peaceful society and world that we would create, but we are often not as attuned to the way of its fulfillment. The tone of our message, the nature of our symbolic statements, the manner of our relationship to both sides in conflict will determine our effectiveness as bridge-builders and peacemakers. Bassam closed his remarks with the classic Gandhian expression of the vision and the way, “There is no way to peace, peace is the way.”

The week that began with Bassam and Yaniv’s talk ended with Shabbat Parah/Sabbath of the Heifer, the third of four special Sabbaths that help us to prepare for Passover and the journey to freedom. We read on that Shabbos from a second Torah scroll (Num. 19:1-22) the ritual of the Parah Adumah/the red heifer, a purification rite to facilitate the re-embrace of life following contact with death. In a special reading for Shabbat Parah, we read from the prophet Ezekiel (36:26): I will give you a new heart, and a new spirit will I put within you, and I will take away the heart of stone out of your flesh, and I will give you a heart of flesh.

There has been too much death and too much killing. If not as directly as it touches Bassam and Yaniv, it touches all of us. We too often become inured to violence. In the way of the ancient ritual, our purification in the return to life is through change of heart and hand, by recognizing and challenging the myriad ways of violence in the worlds around us, and the more subtle expressions of violence within ourselves. Unafraid to examine our own hearts, individuals and
communities, to be of flesh within us and not of stone, we open the way to embrace the other and become whole, each of us a hero of heroes.
Posted by Carl Kline at 6:24 PM