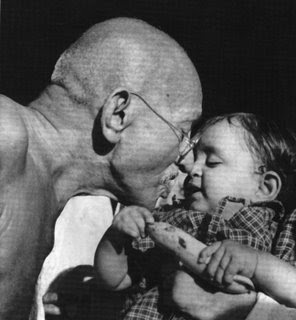 We were doing a peer mediation training at a middle school in South Dakota. We did the training in two parts. The first part was with teachers, staff and parents, who would implement the program. The second part was with the students, once they had been selected by their peers and confirmed by the adult advisers.

We were working in the second part of the program with the students. We were role playing some mediation sessions. One of the teachers and I played two middle school boys who were always getting into a fight on the playground. According to the role we were playing, we both loved basketball. We played pick-up games every chance we had. I complained that he fouled people constantly and never admitted to it. He claimed I was just timid on the basketball court and was afraid of aggressive and physical play. Our mediators were two sixth grade girls.

He told his story. I told mine. The mediators asked us for ways we might resolve the conflict. For us, there were none. We were both rigid in our accusations, unable to envision a resolution. In this kind of situation, our mediation practice allowed the mediators to implement a brainstorming session where we went around the group and each one had a chance to put forward an idea for resolving the conflict. The teacher and I maintained our rigidity but when it came to the first sixth grader, she said "what if you decided you would only play on the same team."

The idea was so simple and yet so profound I was momentarily stunned. The teacher and I looked at each other. He smiled. I smiled back. I knew in my heart of hearts it was the perfect solution. I wanted an aggressive player on my team. He wanted a team mate who held others to a standard of fair play. Our sixth grade mediator had helped turn enemies into friends.

Narayan Desai tells a memorable story of Gandhi turning enemies into friends. It was during the boycott of British goods and Narayan was one of the children living in Gandhi's ashram. Narayan heard through the grapevine that some toys had come for him from outside and Gandhi had confiscated and hid them. So Narayan gathered some of his childhood friends together and they went as a group to confront Gandhi and get the toys.

When they arrived at his cottage, Gandhi was spinning. Narayan asked Gandhi if he had hidden some toys that came for him. Gandhi replied that it was true some toys had come for Narayan but that he hadn't hidden them since they were in plain sight on the shelf. So Narayan said, "give them to me. We want to play with them." Then Gandhi said, "can we play with foreign made toys."

Narayan writes* that in Gandhi's use of that one little word, we, "Bapu had placed me and him on the same side of the fence." Narayan knew Gandhi couldn't play with the toys. At this point, the other children were slipping out of the cottage. Narayan realized his argument had been undercut, the enemy was his friend.

Martin Luther King also reminds us of this fundamental principle in nonviolence. The sixth and last step in nonviolent social change is reconciliation. The final object and goal is turning the enemy into a friend.

Sixth graders, children, can understand this!