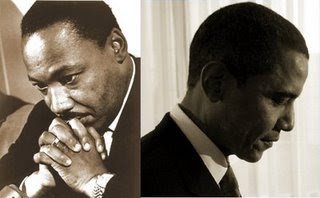 The following post was originally published at the author's "Practicing Presence" blog, the day following the presidential inauguration of Barack Obama.

For most of the past few days, I've been listening to dreams. Dreams of prophets and presidents, of parents and children, of activists and artists, of factory workers and farmers, of soldiers and students, of immigrants and the native-born, of citizens on the left and the right, of human beings all around the world who were dancing, singing, chanting, shouting, laughing, crying....

Some bore witness in silence. Even their silence spoke. Sometimes it was deafening.

I've been listening to dreams of people gathered together, whether in person or on the airwaves or in cyberspace; of people present to one another, and therefore open to possibility; of people so full of the moment, so "here and now," that sometimes they didn't know what to say, didn't know exactly what they were feeling or what it all meant, didn't know how cold they were or what time it was or who they were hugging or what they were going to do next. Race, creed, political party, sexual orientation, age, class—such things were somehow transcended, at least for a moment, and all of us had the opportunity to taste in that moment the wonder of a precious dream becoming flesh. We had the opportunity to taste what can happen when we carefully tend and nurture a vision of how we human beings can live, and be, together, and bring that vision to harvest by hard labor and sacrifice, instead of leaving it to wither on imagination's vine. 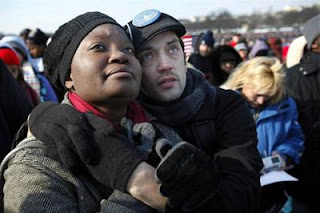 This morning I heard reports that as many as two million people may have been in and around the National Mall for the inauguration ceremony. Two million people, and there wasn't a single arrest made.

The power of a dream.

Dreams are confounding. On the one hand, they can too often become substitutes for real life. We can get so wrapped up in wishing and hoping and longing and yearning that we do little else. The contrast between our dreams and reality is stark. We can't help but regret (even resent) the world as it is and bemoan our apparent place in it. Finally, our dreams so faraway as to be unobtainable, we can't bear them any longer. We abandon them to the cold, letting them freeze to death.

On the other hand, dreams can inspire our days. We can embody a dream and carry it forward, moment by moment, living it out in our very attitude toward the world, in our work within the world. This sort of dream doesn't point to someday. To some degree, it's already here, now, because we're here. It's up to us to help reveal it, to help make it known. It's up to us to give it flesh, not only in our own life but in the life of our community, our society, our nation. It's up to us to join our dreaming to the dreaming of peoples around the world.

We don't have to be a prophet or a president to have a dream, to live a dream, to inspire others to live it with us. Whoever we are, we are enough. All we have to do is give ourselves permission to be the dream we believe in.

For most of the past few days, I've been listening to dreams. As I've listened, my eyes have been hot with tears. Time and again they've spilled down my cheeks. I haven't wiped them away.

No, my tears have been about the dreams, about our grasping the chance to dream them together, and to make them live, together.

Email ThisBlogThis!Share to TwitterShare to FacebookShare to Pinterest
Labels: Dreams