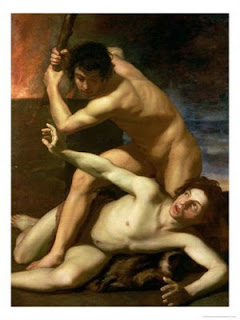 I expect most people have never heard of Lamech. It’s an unusual name found in the first book of the Bible. Lamech is introduced in the 4th. chapter of Genesis, right after the story of Cain and Abel. If you remember this story, Cain kills Abel out of jealousy. God’s punishment is to make him a vagrant and wanderer. But Cain is afraid as a homeless person he will be a victim of violence, even killed. God says “no,” that should anyone kill Cain, he will be avenged seven times.

Lamech is not satisfied with sevenfold vengeance. He confesses to his wives that he has killed a man. Lamech is anticipating a coming “blood feud.” He wants his wives to know that should he be killed, he wants to be avenged seventy seven times.

The Gospel of Matthew reads, “Then Peter came up and asked him, ‘Lord, how often am I to forgive my brother if he goes on wronging me? As many as seven times?’ Jesus replied, ‘I do not say seven times; I say seventy seven times.’”

I’ve just been reading A Thousand Sighs, A Thousand Revolts: Journeys in Kurdistan by Christiane Bird. Bird describes an interview with Ako Abba Mamand Agha, chieftan of the Ako tribe, who acts as a mediator to resolve killings among his people. To be avoided at all costs is the “blood feud,” where families may seek vengeance for generations.

Of course, one doesn’t have to travel to Kurdistan for recognition of “blood feud.” After the experience of 9/11, the U.S. government didn’t limit itself to an “eye for an eye and a tooth for a tooth.” Rather, the government took vengeance in the realm of seventy seven times for the three thousand lost in that horror.

After 9/11, as the country grieved, a good friend said to me, “grief work is about reaching out or lashing out.” We certainly know now what choice the U.S. made.

Martin Doblmeier (the Director of the film Bonhoeffer), has brought us a new film called The Power of Forgiveness. Together, with the film Long Night’s Journey into Day (the story of the Truth and Reconciliation Commission in South Africa), they’ve impressed me with the difficulty of forgiving. Vengeance and forgiveness wrestle in our individual souls. No wonder they struggle so grievously in our world.

Still, one takes hope in the ancient ways of resolving disputes, still functioning around the edges of traditional societies like the Ako. And one takes hope in experimental structures like the Truth and Reconciliation Commission in South Africa and the growing interest in mediation and restorative justice in the U.S.

Gandhi reminds us that only the strong can offer forgiveness. “Only the brave can be forgiving. The weak are unable to punish; therefore, in their case, the question of forgiveness does not arise.” And again, “A mouse hardly forgives a cat when it allows itself to be torn to pieces by her.”

Like nonviolence itself, forgiveness only proceeds from strength and fearlessness. May our country reclaim the inner strength of its ideas and values and turn a deaf ear to the ancient call of fear and vengeance.
Carl Kline
Painting by Bartolomeo Manfredi
Posted by Carl Kline at 11:21 AM

Email ThisBlogThis!Share to TwitterShare to FacebookShare to Pinterest
Labels: Forgiveness